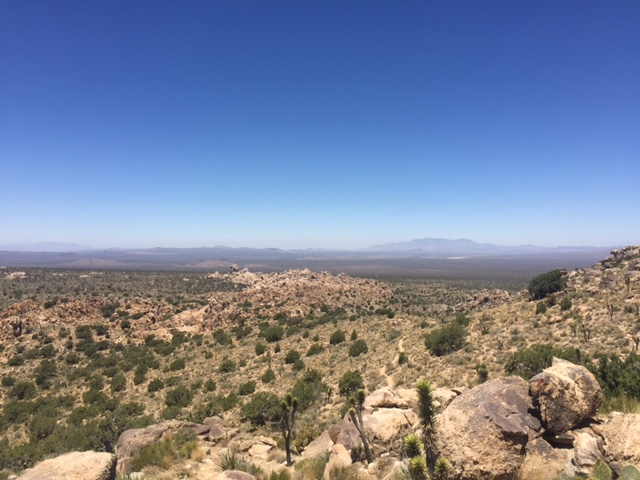 I answered my calling to be a writer in May, and I experienced my first writer’s block in June.  I was visiting Las Vegas, and exploring the Mojave Desert that surrounds it for the first time.  Up until this point in my life, I had only flown over desert.  I clearly remember my first daytime flight into Las Vegas: the sky was clear, I had a window seat, and I was mesmerized.  I watched the land below slowly morph from the Great Lakes and bright green squares I am so familiar with, to wheat-coloured squares, then circles, first continuous and later interspersed with mountain ranges.  Slowly, the mountains turned burnt orange, they developed cliffs and buttes, and the occasional farmed valley or airstrip reminded me that humans really have conquered every corner of the earth.  I would spot the occasional road to nowhere, disappearing into a valley or around a bend.  And then Lake Mead appeared, a shocking, incongruent bright blue against the orange rock, a clear line in the earth showing where the water levels had been only a few decades ago.  Lake Mead gave way to the lush landscape of the Las Vegas suburbs: suburban homes with front lawns and backyard pools, golf courses, fountains, and sprinklers and commerce.  By the time the airplane landed, the desert was no longer recognizable.

This is how my desire to see the desert – and more specifically the Mojave desert of the American Southwest – began, fueled by National Geographic photos and conversations with friends and acquaintances who had visited.  I learned about Bryce Canyon, Sedona, the salt flats north of Salt Lake City (who knew Salt Lake City got it’s name from an actual salt lake?), and Moab, Utah.  The American Southwest had been added to my bucket list.

Now here I was: in the Mojave desert, seeing and feeling the red rock and canyons and desert flowers for the first time, marveling at how blue the sky was, how beautiful such a foreign and arid landscape could be.  I reveled in the desert’s beauty, and loved every moment I spent in it.  I felt calm, grounded and excited all at once.  There was so much I was feeling, so many ideas I wanted to explore: why is this arid land so beautiful?  How can so much life survive here with so little water? How did it’s native inhabitants survive here?  And by the way, where was the water?  What is the impact to this environment of the sprawling metropolis less than an hour away?  Why must we abuse Mother Nature?  What was life like here before the towns became ghosts, when they were railroad towns and mining towns?  Before the towns even got here?  Before Europeans got here?

I felt joy in the desert.  I felt freedom and expansion and sheer bliss as we drove along an open road to nowhere (it disappeared over the horizon), with no other cars in sight: my life lay out before me as a series of endless possibilities.  Yet when I tried to write, to coherently organize and document my thoughts, I couldn’t.  Words made it onto the page, but they were empty, meaningless.  They were void of the joy I felt hiking through canyons and climbing peaks, void of the freedom that filled my heart as we drove through Joshua Tree forests, sand dunes and lava fields.  I simply could not find the words to express my emotions.  I felt frustrated and defeated, so I accepted defeat and walked away. If we don’t document an experience, does it mean that it did not happen?  In our age of start phones and Instagram and Snapchat, many meaningful (and many non-meaningful) moments of our lives are captured, recorded and broadcast for all our “friends” to see and comment.  But what about the experiences and feelings that are not captured by a digital image or a written word?  Are they any less real?  Any less lived?  Of course not.  Ask anyone who remembers a time before smartphones, before digital cameras, maybe even before the proliferation of 35mm film, and they will tell you: memories are documented in the mind and in the heart, not on social media.  Psychologists have even proven that taking photographs actually reduces our memories (https://www.psychologytoday.com/blog/mental-mishaps/201312/photographs-and-memories).   So I accepted that my first trip to the desert would remain a cherished memory locked in my heart.  There would be no blog post.  And then this story formed itself and tumbled out early one morning in late July, six weeks after my trip.  By accepting and embracing my writers block, I was able to move past it.

This is a text widget, which allows you to add text or HTML to your sidebar. You can use them to display text, links, images, HTML, or a combination of these. Edit them in the Widget section of the Customizer.
%d bloggers like this: